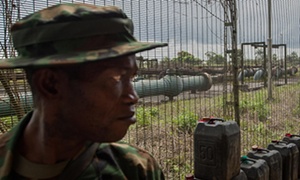 Pipeline vandalism in the Niger delta costs the state and oil companies $14bn (£9.3bn) a year and devastated up to 52,000 hectares of land in 2014, according to new estimates by a leading Nigerian research and development group.

But the way to stop the damage is not by militarising the volatile region but by providing jobs to unemployed youths and giving communities a share in legitimate oil profits, says Stakeholder Democracy Network (SDN) in a report that coincides with the 20th anniversary of the execution by the Nigerian government of writer and Ogoni leader Ken Saro-Wiwa. Finally it seems as if Ken Saro-Wiwa, my father, may not have died in vainKen Wiwa Read moreThe scale of pipeline vandalism – which sees infrastructure tapped to steal crude oil – has now reached epidemic proportions.

The government’s National Oil Spill Detection & Response Agency (Nosdra) record ed more than 900 sabotage incidents last year across the 12,700km of pipes belonging to local and international companies.The thefts range from small-scale pilfering to industrial-scale theft coordinated by and in collaboration with the Nigerian military, corrupt corporate executives and community leaders.In some cases, say the authors who interviewed 83 people ranging from local chiefs and youths to government officials, the pipelines are deliberately “cracked” to create work.“There is an implicit incentive to vandalise pipelines in return for clean-up contracts. The youth benefit from clean-up after every spill,” one interviewee said.“Our friends that have gone to school, why are they still unemployed? I can crack pipe and earn money quickly,” said one man who admitted sabotaging pipelines.Youths “vandalise to survive” in the absence of other employment choices and ignore the long-term impact to their local environment and health, says the report. “The environmental impact is immense with an estimated 51,500 hectares devastated by oil spills in 2014 as a direct consequence of pipeline vandalism.

”The report added: “In communities, the feeling of anger and demand for attention motivates vandals to interrupt pipelines at the expense of their environment and livelihoods, with many addicted to easy money from surveillance and clean-up contracts.”But the authors point to several positive initiatives that suggest that vandalism could be stemmed.AdvertisementNiger Delta Petroleum Resources, a Nigerian-owned company, has had few problems with vandalism because, say the authors, “it appears to pay its staff more than international oil companies as an incentive and to promote a culture of ownership over company internal values and processes”.

A percentage of every barrel of oil produced goes back to a community trust fund to support development. A second company, Addax Petroleum, has avoided vandalism by employing community pipeline surveillance teams, including ex-military, who were given a mandate to patrol 1km lengths of pipeline.The Indorama Eleme Petrochemical Company, which makes pharmaceutical raw materials, operates an equity-sharing model with six communities together having a 7.5% stake in the company. According to the report, it had not had any of its pipelines vandalised.Vandalism is rife because both community leaders and oil companies try to employ “divide and rule” tactics, say the authors. “Chiefs, paramount leaders, and youth and cult leaders … have used their power to their own personal advantage, creating divisions, wealth inequality and distorted power structures within communities.

Oil-companies, rather than intervening on a moral basis, have seen this as an opportunity to create factions in the community”.A spokesman for Shell in Nigeria – the Shell Petroleum Development Company (SPDC) – said it took numerous measures to limit the impact of criminality and campaigned to raise awareness of the problem. “However, theft, sabotage and illegal refining continue to be the main source of environmental damage in the Niger delta today. It is vital that collaboration between operating companies, communities, the Nigerian government and its international partners is maintained and expanded,” he said.

The state, too, is held responsible for distrust within the communities. “The Nigerian state has failed to provide basic public services and security, allowing the social contract to breakdown. In the void that remains, international and national oil companies are often seen as a government proxy, spending millions of dollars in their operating locations.“However, these efforts are not perceived to have the communities’ interests at heart, preferring to secure a short-term licence to operate as opposed to a long-term legacy in the region,” it says.But SDN acknowledges that stemming vandalism and oil theft will be difficult because grand-scale oil theft is now very big business “with a concentrated and well-connected few earning hundreds of millions of dollars in revenues and profits every year”.