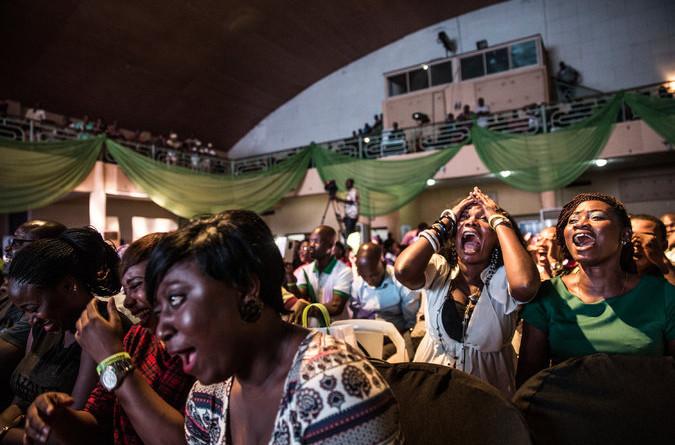 The thieves were having a field day, the comedian Ali Baba exclaimed to a large auditorium of lawyers. It was so bad that they struck every car along a deeply potholed road — that is, until a former governor came along.

“They looked at him, and said he should drive on,” he said as the crowd grew silent. “The other armed robber said: ‘Why? Why did you let that car go?’ ”

“ ‘Esprit de corps’ ” — a camaraderie among brothers — he said, delivering the punch line and unleashing roars of laughter throughout the audience.

Forget crooked politicians, daily blackouts, long lines at gas stations or even the scourge of Boko Haram here in Nigeria, Africa’s most populous nation. Despite the litany of social ills and troubles — or maybe because of them — Nigeria has never laughed harder.

Comedy here is thriving. Top comics have become, in a few short years, among Nigeria’s most successful entertainers and now perform throughout Africa.

Stand-up comedy, which emerged with Nigeria’s return to democratic rule in 1999, has become the country’s third-biggest form of entertainment after movies and music, industry experts say. It now draws countless aspiring comics to thriving comedy scenes in medium-size cities and to the country’s center of laughter here in Lagos.

“Nigerians still go through all kinds of trauma in their daily lives because of the comatose nature of our leadership,” said Ezechi Onyerionwu, a literature professor who has written about comedy. “So people look for areas in life where they can find succor, and that’s why comedy shows are sold out.”

So quickly has the art form caught on that stand-up comics have become fixtures at social events, like the lawyers association that hired Ali Baba for its dinner here recently. Securing a talented comic for a wedding, company event or political gathering has now become de rigueur in Nigeria’s higher social circles.

“Ten years ago, you had masters of ceremonies who would just run a program and put in some lighthearted talk that would make people smile,” said Barclays Ayakoroma, a cultural critic who has written about the rise of stand-up comedy in Nigeria. “But today, depending on how deep your pocket is, you must get a good stand-up comedian for your event. Today, there is hardly any function that you will not see a stand-up comedian coming in and performing during interludes. It’s a common practice nationwide.”

Stand-up comics — rib crackers or humor merchants, as they are also called here — tap into the nation’s enduring ability to find laughter in the bleakest moments, sometimes in its collective misery itself.

Julius Agwu, another top comedian, makes fun of the frequent power blackouts, part of every Nigerian’s daily life, through a joke about a Nigerian man who travels to London for the first time.

“When he arrived, he just brought out all his clothes and started ironing them,” Mr. Agwu says. “His uncle that he was staying with asked: ‘What’s wrong? Why are you ironing your clothes. Where are you going to?’ He said, ‘No, I want to rush before they take the light.’ ”

Working in such public spheres, the comedians are challenging deeply rooted social and political mores. Socially, Nigeria remains an extremely hierarchical country where powerful individuals are treated with fawning respect. For the second time since military rule ended in 1999, Nigeria finds itself governed by a former general, President Muhammadu Buhari, evidence of the military’s lingering influence.

Basketmouth, another leading comedian, was fiercely attacked recently for making jokes about embezzlement in the previous government. The jokes were uploaded online and drew criticism from the former governing party and its supporters. The comedian, whose real name is Bright Okpocha, was accused of tarnishing Nigeria’s image.

Akporobomerere, whose stage name is Ali Baba, is a comedy pioneer in Nigeria. Credit Glenna Gordon for The New York Times“I can stay away from religious jokes,” Mr. Okpocha, 37, said, “but I’m not going to stay away from political jokes. It’s something that affects the common man and nobody is speaking on their behalf. Inasmuch as I definitely have to limit myself so that I can live longer, I can’t see a truth and not say it.”

Theater was popular here in the 1960s and 1970s, but to most Nigerians, stand-up comedy was unknown when the present era of civilian rule began.

“During military rule, you couldn’t go and start cracking jokes about the head of state,” said Mr. Ayakoroma, the critic. “That night, they would have come for you. So we can say that civilian rule opened the way for people to make jokes about our leaders without fear of being arrested.”

Ali Baba, whose real name is Atunyota Alleluya Akporobomerere, is considered the pioneer of stand-up comedy in Nigeria. Now 50, he recalled how, with no Nigerian models to emulate, he researched the distinctly American art of stand-up comedy by combing through old copies of Reader’s Digest and reference materials like “10,000 Jokes, Toasts and Stories.”

“You see how used it is,” he said, holding up the book.

He also frequented an information center run by the American government, studying its videos of Eddie Murphy and Richard Pryor.

Then, he got help from an unexpected source: Olusegun Obasanjo, a former general who became Nigeria’s civilian president from 1999 to 2007.

When Mr. Obasanjo was Nigeria’s military ruler between 1976 and 1979, he had shown little tolerance for criticism. After Fela Anikulapo-Kuti, the Afro-beat musician and activist, criticized the military in a song called “Zombie,” Mr. Obasanjo’s soldiers burned down his house and killed his 77-year-old mother.

But under democracy, Mr. Obasanjo championed comedians like Mr. Akporobomerere, who roasted him regularly, and recommended him for performances.

“Companies wanted to use our services, and young people wanted to take up comedy as a career,” said another popular comedian, Okey Bakassi, whose real name is Okechukwu Anthony Onyegbule. “That changed everything.”

Still, comics can never be too careful.

“There are certain people in government who do not have a sense of humor,” Mr. Akporobomerere said.

Sometimes he texts jokes to politicians with whom he has built a relationship to gauge their response before using the material.

As comedians have become powerful, some politicians have come to understand the benefits of serving as comic material. Being the subject of a joke can be proof of the politician’s power or of ties to an influential comic.

Mr. Buhari may not be one of them. Known for his seriousness, he used his first Independence Day address, on Oct. 1, to criticize his countrymen for being “unruly.” As a military ruler in the 1980s, General Buhari waged a campaign called “War Against Indiscipline.” Nigerians were forced to form orderly lines at bus stops and other places under the gaze of the police and whip-wielding soldiers.

“So far, he’s not known as a type that will host parties,” said the comedian known as Basketmouth. “He’s a pretty serious guy, which is what we need for now. We don’t need to party. We need to fix the country right now.”