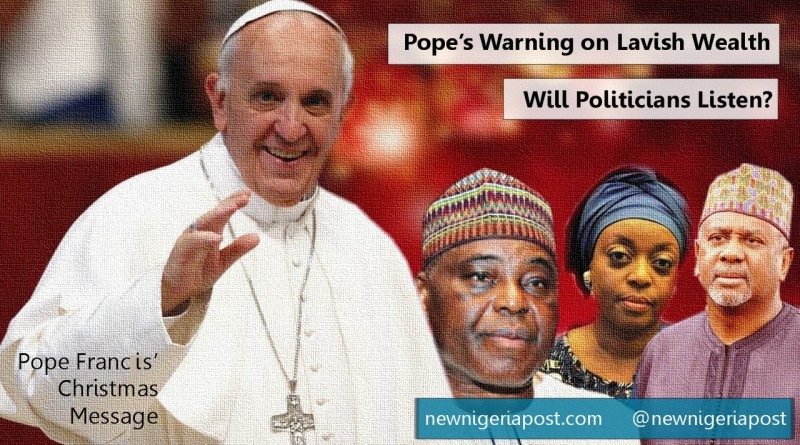 Pope Francis has used his Christmas message to warn against accumulation of lavish wealth.  Firstly, Merry christmas to all who celebrate it.  Religious festivals, be they not celebrated by all, often present an opportunity for religious and world leaders to address some of the burning issues across the world.  I have chosen this year to explore the message of Pope Francis, leader of the Catholic Christian faith and perhaps the post recognisable religious leader today.  There are an estimated 1.2 billion Roman Catholics in the world, according to Vatican figures. More than 40% of the world’s Catholics live in Latin America – but Africa has seen the biggest growth in Catholic congregations in recent years.  The Pope, of course, is also the Head of State of Vatican City.

I will be referring to two messages from the Pope over the christmas period.  The first was his speech on christmas eve, celebrating a Mass in St. Peter’s Basilica.  Pope Francis, nearly three years in the papacy, called for sobriety and compassion for the less fortunate, stating that Christmas was a time to “once more discover who we are”.  In his homily, the Pope made a remarkable statement, very simple, but profound in its implications particularly for us here in Nigeria.

“In a society so often intoxicated by consumerism and hedonism, wealth and extravagance, appearances and narcissism, this Child calls us to act soberly, in other words, in a way that is simple, balanced, consistent, capable of seeing and doing what is essential,”- Pope Francis, December 2015

Nigeria has witnessed the excesses of politicians intoxicated with wealth, extravagance and power, with those who are already incredibly wealthy being involved in financial scandals of unbelievable proportions.  A case in hand is the twin scandals of the ‘Arms Deal Scam’ (commonly referred to as ‘Dasukigate’; and the NNPC missing funds scandal in which former Minister of Petroleum, Diezani Madueke is embroiled in; and which has partly contributed to her arrest in London, United Kingdom. Here the Pope again: “Amid a culture of indifference which not infrequently turns ruthless, our style of life should instead be devout, filled with empathy, compassion and mercy, drawn daily from the wellspring of prayer”.  It is said that billions of dollars are inappropriately extracted from Nigeria every year, in a country where millions live below the poverty line; it speaks to the indifference and ruthlessness of those who have stepped forward to hold public offices.

The second message was delivered by Pope Francis on Christmas Day in which he called on everyone to ‘…allow tears of repentance to fill our eyes and cleanse our hearts. This is something we all need!’  But will Nigerian politicians listen?  The hardship and evil created by the behaviour of our politicians in vast and largely untold; what the Pope referred to as ‘at times monstrous evil, which selfishness spawns in our midst.’  To think that the ‘Arms Deal Scam’ has caused the deaths of thousands of innocent civilians and indeed the lives of Nigeria service men, is mind-boggling; where those vested with the duty to protect the public, turned and carried out an ‘operation-share-the-money’ approach on resources intended to purchase arms to secure lives and property. The nations most needed resources were allegedly shared to political figures, media houses and other parties; safe to say, away from the purposes for which the funds were intended.  This outrage is a clear example of the evil of which the Pope speaks.

To fight against corruption is to fight against evil in the world.  It is unfortunately that many in our politics lack the moral fortitude to think beyond themselves and their selfish desire to amass wealth which they cannot consume, but which denies others the opportunity of a better life.  How many houses can one live in, how many cars, or other goods?  Evidence is that most of the looted funds simply sit in overseas accounts and or sitting in unoccupied properties; a serious tragedy when you consider the begging, hawking and hungry children across Nigeria, for whom basic education is a luxury; in a country as vastly blessed as Nigeria.  I look to a future where our politics is populated by people who have basic care for our country, as Pope Francis put it, we look to a world where we can ‘sustain the commitment of those with public responsibilities in political and economic life, that they may work to pursue the common good and to protect the dignity of every human life.’