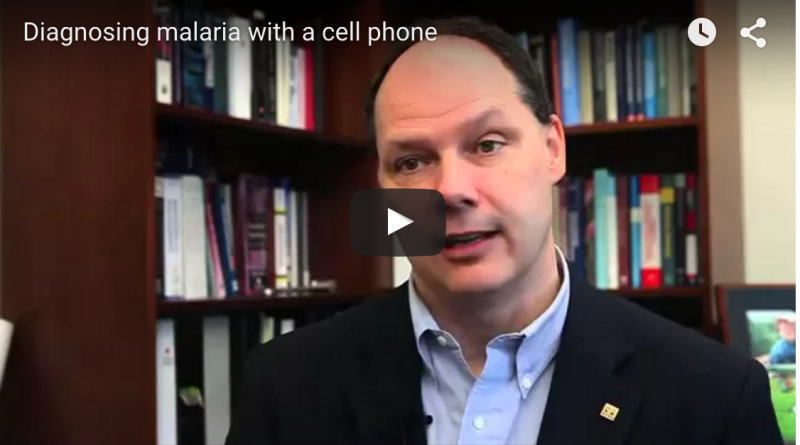 New technology that transforms a mobile phone into a mobile polarized microscope can diagnose malaria in a Rwandan village with the same level of accuracy as a hi-tech lab in a major Western city, according to Texas A&M University biomedical engineers developing the device.

The way they diagnose malaria now is with a microscope but it is with a big bench top microscope that is relatively complicated to use, takes a trained technician, and you have to have the facility for that scope in a centralized lab somewhere. So basically what we are taking is that gold standard and making it into a portable device, – Gerard Cote, a professor of Biomedical Engineering.

The add-on device, known as a mobile-optical-polarization imaging device (MOPID), makes use of a smart phone’s camera features to produce high-resolution images of objects 10 times smaller than the thickness of a human hair.

The device images a blood sample using polarized light that can detect a malaria parasite byproduct called Hemozoin crystals which appear as very bright dots in the image and are an accurate indicator of infection.According to the scientists, once the device is attached to the phone, the diagnosis takes just minutes using a phone app.

In 2015, there have been around 214 million cases of malaria globally so far, approximately 438,000 of which were fatal – with 90 percent of those deaths occurring in Sub Saharan Africa, according to the World Health Organization.

It’s those stark statistics which inspired the team to keep the device as affordable as possible, to ensure it could be used where it’s needed most. Smartphones are widely available in Africa and the team says the cost of the add-on optics will be less than $50 (USD) with the disposable blood sampling cartridges priced at less than a dollar.   The team plans on field testing the cell phone microscope next summer in Rwanda.