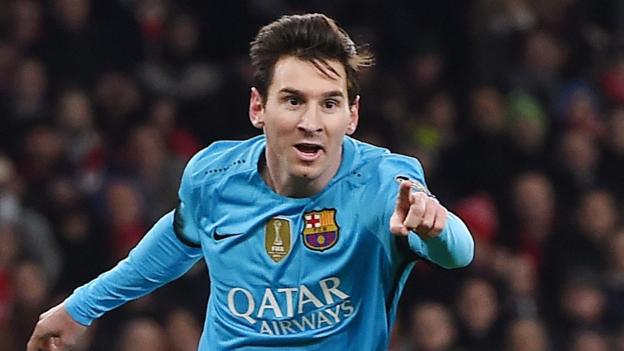 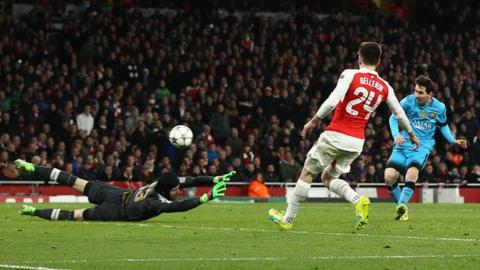 Lionel Messi effectively condemned Arsenal to a sixth successive exit at the last-16 stage of the Champions League with two decisive goals at Emirates Stadium.Arsenal battled gallantly to give themselves a chance going into the second leg at the Nou Camp in three weeks’ time – but suffered at the hands of Barcelona’s superstar trio Messi, Neymar and Luis Suarez.

After Alex Oxlade-Chamberlain and Olivier Giroud had come close to giving Arsenal the lead, Messi scored his first goal against keeper Petr Cech at the seventh attempt when he crowned a blistering a counter-attack involving Suarez and Neymar to sweep home a finish after 71 minutes.

And further damage was inflicted seven minutes from time when Arsenal substitute Mathieu Flamini floored Messi with a mistimed challenge and he got up to send Cech the wrong way from the spot. It was his eighth goal against Arsenal in the Champions League.

Suarez hit the post and Cech saved from Neymar as Barcelona took control – but this tie already looks well out of Arsenal’s reach.Follow reaction to the game here.

All over for Arsenal

Arsenal went out to Barcelona in 2010 and 2011 and that was after a draw and a win at Emirates Stadium – so their chances can be all but written off after this defeat.

The Gunners had their chances but they came to nothing, with Oxlade-Chamberlain a culprit when he allowed Barcelona keeper Marc-Andre ter Stegen to save from a huge opportunity before Giroud saw a second-half header well saved.

Such is the ruthlessness of this Barcelona side that even half-chances (or less) have to be accepted and, if they are not, there is almost an inevitability about the outcome.

Wenger can make the usual optimistic noises about the second leg in the Nou Camp but it would be the greatest result of his reign if he managed to inspire a turnaround from this position.

It is, perhaps, on nights like these that those calls for Wenger to sign a world-class striker carry greater resonance because even the smallest opportunities have to count and Arsenal were unable to do so.

The big fear before the game was that Arsenal would be unable to keep Barca’s big three quiet for 90 minutes no matter how hard they tried – and so it proved.

Strange as it may seem, this was not Messi, Neymar and Suarez at their very best but they still cast a huge shadow over Arsenal and created havoc.

Suarez had two missed opportunities at the end of the first half, Cech made two magnificent saves from Neymar and Messi contributed to the two decisive goals. This on a night when even the three themselves will admit they have played much better.

All three carry a touch of genius while offering contrasting qualities. Neymar’s change of pace was startling, Suarez is like a shark as he makes his way around defences spreading chaos while Messi remains peerless.

Any team hoping to take the Champions League crown from Barcelona will have to work out how to stop the great Barcelona trinity – easier said than done.

Arsenal and manager Wenger will be desolate after this result effectively consigns them to yet another last 16 exit – but they deserve a measure of credit for their display.

In the first half they were hugely disciplined to keep Barcelona at bay, indeed in the first 30 minutes the holders only had two touches in Arsenal’s penalty area compared to 11 from Wenger’s team.

Goalkeeper Cech was immense while Nacho Monreal and Aaron Ramsey were also excellent.

Ultimately, however, Arsenal were not good enough – no shame in that – but all that is left is for Barcelona to complete the formalities in Catalonia in three weeks.

Arsenal manager Arsene Wenger on BT Sport: “Barcelona are a great team. We put a lot of energy in the game and technically we were very average.

“Realistically it is very, very difficult, if not impossible. We have to go there and fight. We had the chances, we didn’t score.”

Barcelona boss Luis Enrique: “I am happy with everything. There was nothing that I didn’t like. Nothing.”

“The result is really good, but the tie is not over. We will have to go out to win.”

Former England midfielder Jermaine Jenas on BBC Radio 5 live: “I felt the Arsenal players gave a good account of themselves in parts of the game but this Barcelona side have got too much class.

“Arsenal will be thinking what could have been. They didn’t capitalise on the opportunities they had. They didn’t seem to have enough when Barcelona ramped it up.

“I was really happy with Arsenal’s tactics for once but I don’t think they had the quality in the final third.”

The stats you need to know

Arsenal will have to raise themselves quickly after this defeat as they get back to their Premier League title chase with a game at Manchester United on Sunday, 28 February (14:05 GMT). Spanish league leaders Barcelona host Sevilla in La Liga on the same day. 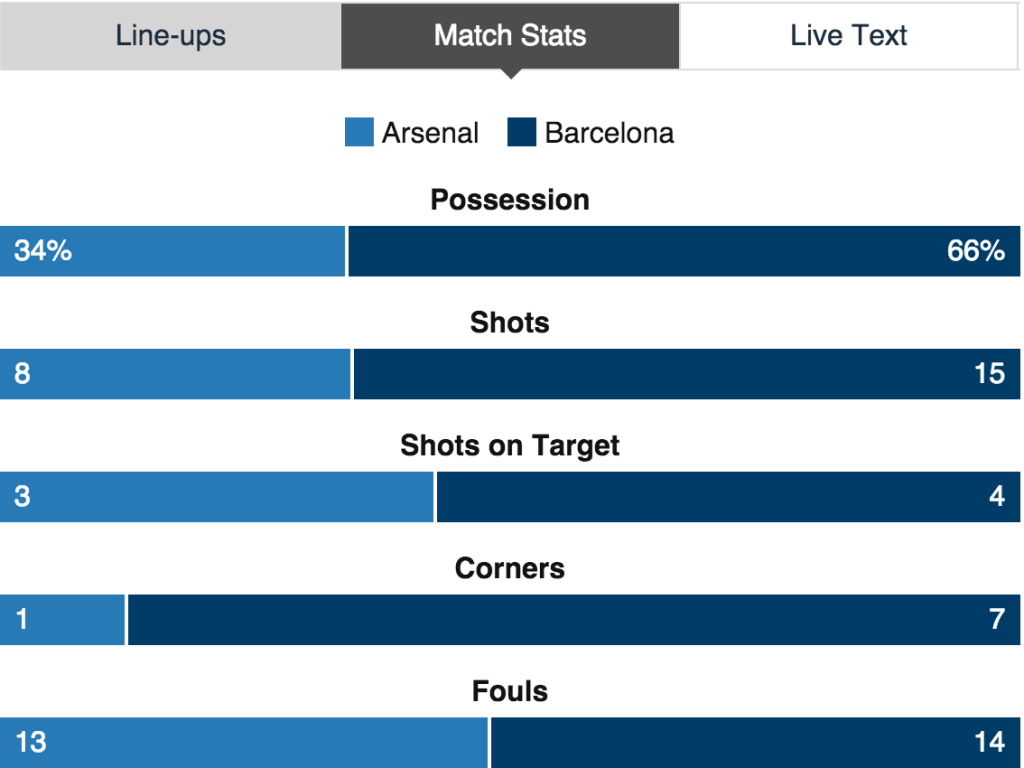