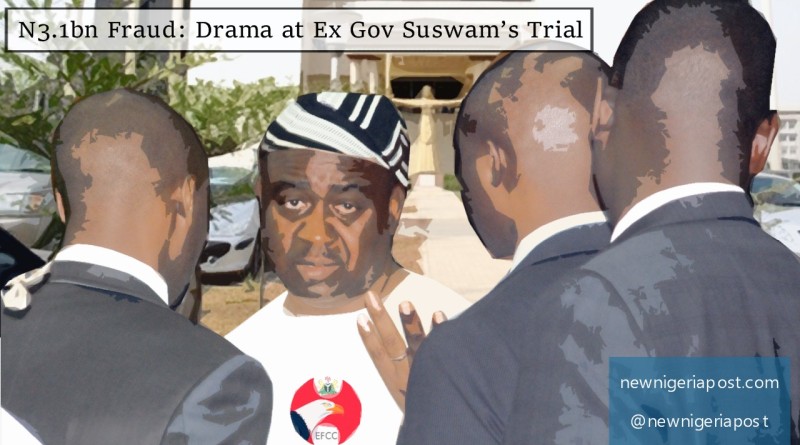 The trial of Gabriel Suswam, former governor of Benue State and his Commissioner of Finance, Okolobia Okpanachi, continued on Monday, February 15, 2016, with a prosecution witness, Brijid Shiedie, managing director and chief executive officer, Benue Investment and Property Company Limited, telling Justice A. R. Mohammed of the Federal High Court Abuja, how the sum of N1bn was allegedly paid to Elixir Security Limited, after a meeting with Okpanachi.

Suswam and Okolobia are facing a nine-count charge bordering on diversion of N3.1 billion during his tenure as governor.

At the resumed hearing today, Shiedu, who was led in evidence by prosecuting counsel, Rotimi Jacobs, SAN, further told the court that Elixir was invited by the state government to carry out a check of where the state’s shares were domiciled and consolidate them in one stock- broking firm.

She added that the state government consequently needed BIPCL, as the custodian of the shares, to sign, in order to enable Elixir achieve the mandate of consolidating the shares.

She also told the court that both Suswan and Okpanachi directed BIPCL to pay Elixir the proceeds of Benue State shares, into two accounts, provided by the ministry of finance letterhead.

However, she said that no specific amount was indicated in the correspondence.

‘‘When Elixir called me to find out what was to be paid into each of the accounts, I said that since the money was going to the Benue State government, a request should be forwarded to the Commissioner of Finance. It was communicated on the Company’s letterhead,’’ Shiedie explained.

The court had earlier admitted in evidence, the certified copy of Certificate of Incorporation of BIPCL from the Corporate Affairs Commission.

The defence counsel, Joseph Daudu, SAN, asked for an adjournment to enable him cross-examine the witness, saying she is crucial to the case.

Consequently, the case was adjourned to February 16, 2016.