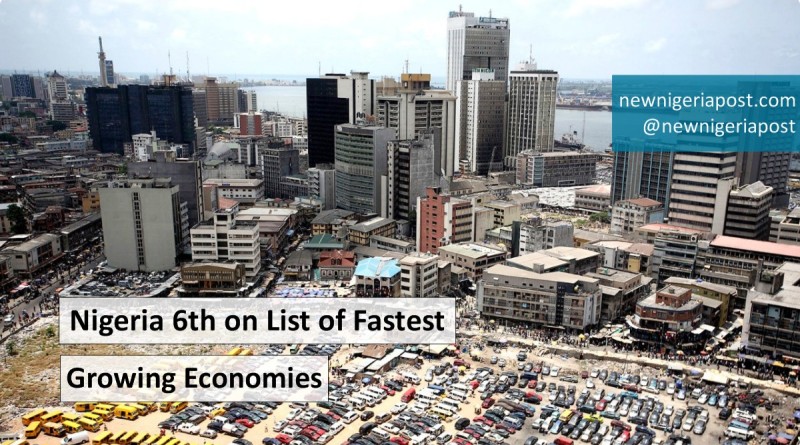 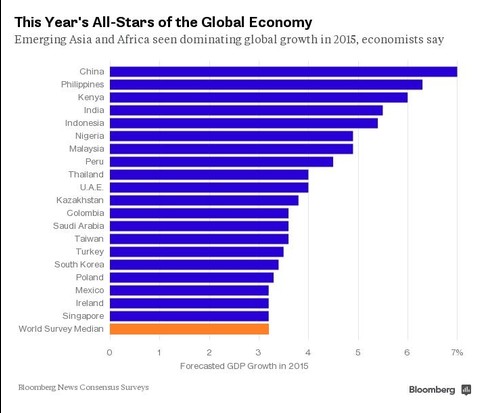 Nigeria has been ranked 6th in the last of 20 fastest growing economies in the world; the list, global growth projection over the next two years, is dominated by emerging markets in Asia and Africa.

The world is expected to grow 3.2 percent in 2015 and 3.7 percent next year after expanding 3.3 percent in each of the past two years, according to a Bloomberg survey of economists. China, the Philippines, Kenya, India and Indonesia, which together make up about 16 percent of global gross domestic product, are all forecast to grow more than 5 percent in 2015.

Nigeria, Africa’s largest economy, is projected to expand 4.9 percent this year, according to the Bloomberg survey.

Nigeria recently overtook South Africa to become the largest economy in Africa, and is expected to make significant global economic impact in the coming decades.

Global financial rating firm Moody’s has predicted that Nigeria’s current GDP of $510 billion will experience a surge of exponential growth.

With a population of 170 million and oil reserves estimated at around 37.2 trillion barrels (or roughly 28 percent of total African reserves), Nigeria is likely to number among the world’s 15 largest economies by 2050 when GDP is projected to exceed $4.5 trillion in purchasing power parity terms.  – Aurelien Mali, VP-senior analyst, Moody’s.

Recent growth has already placed Nigeria’s ranking among global economies from 36th place to 28th place. Currently, Nigeria, which is Africa’s largest oil producer and most populous country, has an economy almost as large as that of Netherlands.

According to Ventures Africa, the latest GDP reveals greater diversity with the economy, featuring major contributions form a variety of sectors including entertainment and telecommunication, which were previously marginal factors to the GDP.

The challenge for Nigerian politicians is how the economic fortunes of the country translates into better prospects for the ordinary citizens most of whom still live below the poverty line.