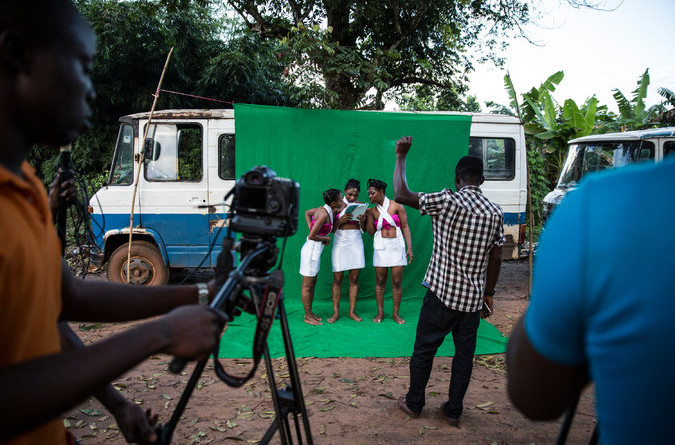 ASABA, Nigeria — Sitting on a blue plastic stool in the sweltering heat, Ugezu J. Ugezu, one of Nigeria’s top filmmakers, was furiously rewriting his script as the cameras prepared to roll. “Cut!” he shouted after wrapping up a key scene, a confrontation between the two leading characters. Then, under his breath, he added, “Good as it gets.”

This was the seventh — and last — day of shooting in a village near here for “Beyond the Dance,” Mr. Ugezu’s story of an African prince’s choice of a bride, and the production had been conducted at a breakneck pace.

“In Nollywood, you don’t waste time,” he said. “It’s not the technical depth that has made our films so popular. It’s because of the story. We tell African stories.”

The stories told by Nigeria’s booming film industry, known as Nollywood, have emerged as a cultural phenomenon across Africa, the vanguard of the country’s growing influence across the continent in music, comedy, fashion and even religion.

Nigeria, Africa’s most populous nation, overtook its rival, South Africa, as the continent’s largest economy two years ago, thanks in part to the film industry’s explosive growth. Nollywood — a term I helped coin with a 2002 article when Nigeria’s movies were just starting to gain popularity outside the country — is an expression of boundless Nigerian entrepreneurialism and the nation’s self-perception as the natural leader of Africa, the one destined to speak on the continent’s behalf.

“The Nigerian movies are very, very popular in Tanzania, and, culturally, they’ve affected a lot of people,” said Songa wa Songa, a Tanzanian journalist. “A lot of people now speak with a Nigerian accent here very well thanks to Nollywood. Nigerians have succeeded through Nollywood to export who they are, their culture, their lifestyle, everything.”

Nollywood generates about 2,500 movies a year, making it the second-biggest producer after Bollywood in India, and its films have displaced American, Indian and Chinese ones on the televisions that are ubiquitous in bars, hair salons, airport lounges and homes across Africa.

The industry employs a million people — second only to farming — in Nigeria, pumping $600 million annually into the national economy, according to a 2014 report by the United States International Trade Commission. In 2002, it made 400 movies and $45 million.

Nollywood resonates across Africa with its stories of a precolonial past and of a present caught between village life and urban modernity. The movies explore the tensions between the individual and extended families, between the draw of urban life and the pull of the village, between Christianity and traditional beliefs. For countless people, in a place long shaped by outsiders, Nollywood is redefining the African experience.

“I doubt that a white person, a European or American, can appreciate Nollywood movies the way an African can,” said Katsuva Ngoloma, a linguist at the University of Lubumbashi in the Democratic Republic of Congo who has written about Nollywood’s significance. “But Africans — the rich, the poor, everyone — will see themselves in those movies in one way or another.”

In Yeoville, a neighborhood in Johannesburg that is a melting pot for migrants, a seamstress from Ghana took orders one recent morning for the latest fashions seen in Nollywood movies. Hairstylists from the Democratic Republic of Congo, Mozambique and Zimbabwe, working in salons or on the street, offered hair weaves following the styles favored by Nollywood actresses.

“Nigerian movies express how we live as Africans, what we experience in our everyday lives, things like witchcraft, things like fighting between mother-in-laws and daughter-in-laws,” said Patience Moyo, 34, a Zimbabwean hair-braider. “When you watch the movies, you feel it is really happening. One way or another, it will touch your life somewhere.”

When I first reported on Nigeria’s film industry more than a decade ago, the movies were slapped together in such a makeshift fashion that, during one interview, a production manager offered me the part of an evil white man. (Never mind my Japanese roots, he assured me, I was close enough.)

After I casually threw out the term “Nollywood” in a conversation with a colleague, a copy editor created this headline for my article: “Step Aside, L.A. and Bombay, for Nollywood.”

The name stuck — and spread. But success hasn’t robbed Nollywood of its freewheeling ways: During my recent visit to a Nigerian village where a half-dozen movies were being shot, a producer came over and, on the spot, offered me the role of an evil white man who brings a vampire to Nigeria.

Back in 2002, the movies were simply known as Nigeria’s home videos. They were popularized at first through video cassettes traded across Africa, but now Nollywood is available on satellite and cable television channels, as well as on streaming services like iRokoTV. In 2012, in response to swelling popularity in Francophone Africa, a satellite channel called Nollywood TV began offering round-the-clock movies dubbed into French. Most Nollywood movies are in English, though some are in one of Nigeria’s main ethnic languages.

Until Nollywood’s ascendance, movies made in Francophone Africa — with grants from the French government — dominated filmmaking on the continent. But these movies catered to the sensibilities of Western critics and viewers, and won few fans in Africa, leaving no cultural footprint.

In Nollywood, though, movies are still financed by private investors expecting a profit.

“You want to do a movie? You have the script? You look immediately for the money and you shoot,” said Mahmood Ali-Balogun, a leading Nigerian filmmaker. “When you get a grant from France or the E.U., they can dictate to you where to put your camera, the fine-tuning of your script. It’s not a good model for us in Africa.”

Mr. Ali-Balogun was speaking from his office in Surulere, Lagos, the birthplace of Nollywood. Film production has since moved to other cities, especially Asaba, an otherwise sleepy state capital in southeastern Nigeria. On any given day, a dozen crews can be found here — “epic” films with ancient story lines like “Beyond the Dance” are in the works in nearby villages, while “glamour” movies about modern life make the city itself their sets.

One recent entry in the glamour category was “Okada 50,” the story of a woman and son who, after leaving their village, open a coffin business in the city and terrorize their neighbors.

Once completed in Asaba, the movies find their way to every corner of Africa, released in the original English, dubbed into French or African languages, and sometimes readapted, repackaged and often pirated for local audiences. Many movies are also propelled by a symbiotic relationship with Nigeria’s Pentecostal Christianity, which pastors have exported throughout Africa.

In the Democratic Republic of Congo, pastors who visited Nigeria years ago returned with videocassettes and showed the films in church to teach Christian lessons and attract new members, said Katrien Pype, a Belgian anthropologist at the University of Leuven who has written about the phenomenon.

Today in Kinshasa, the Congolese capital, Nollywood permeates mainstream culture. Local women copy the fashion, makeup and hairstyles of the actresses; local musicians grumble at the popularity of Nigerian imports, like Don Jazzy and the P-Square twins.

Trésor Baka, a Congolese dubber who translates Nollywood movies into the local language, Lingala, said the films are popular because “Nigeria has succeeded in reconciling modernity and their ancient ways, their culture and traditions.”

In Kitwe, Zambia, local filmmakers were recently making their latest movie in true Nollywood style: a family melodrama shot over 10 days, in a private home, on a $7,000 budget. Burned onto DVD, the movie will be sold in Zambia and neighboring countries.

Acknowledging the influence of Nigerian cinema, the movie’s producer, Morgan Mbulo, 36, said, “We can tell our own stories now.”