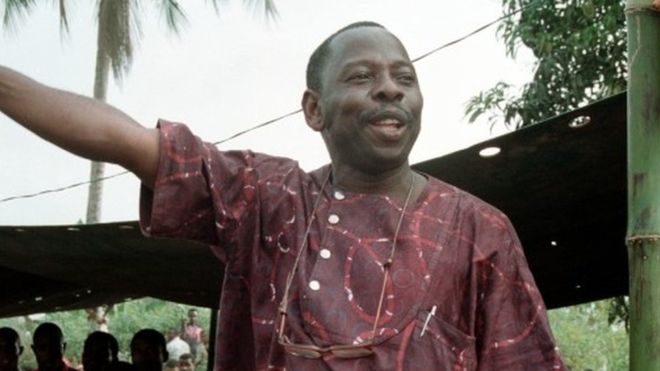 The new Buhari administration should take the bull by the horn and do what is right.  Ken Saro-Wiwa is a hero across and must rightfully be recognised as such in Nigeria too.  The struggle for justice for the Ogoni people was a landmark event in our countries history mainly down to the leadership of Ken Saro-Wiwa.

Supporters of renowned Nigerian environmental activist Ken Saro-Wiwa have called for him to be posthumously pardoned, as they mark the 20th anniversary of his execution.Nigeria’s then-military regime sparked global outrage after convicting Mr Saro-Wiwa of murder and hanging him.The West African state’s main human rights body said his trial was “deeply flawed”, and he should be pardoned.Mr Saro-Wiwa led mass protests against oil pollution in Nigeria’s Ogoniland.The protests were seen as a major threat to then-military ruler Gen Sani Abacha, and oil giant Shell.Military rule ended in Nigeria, Africa’s most populous state and biggest oil producer, in 1999.