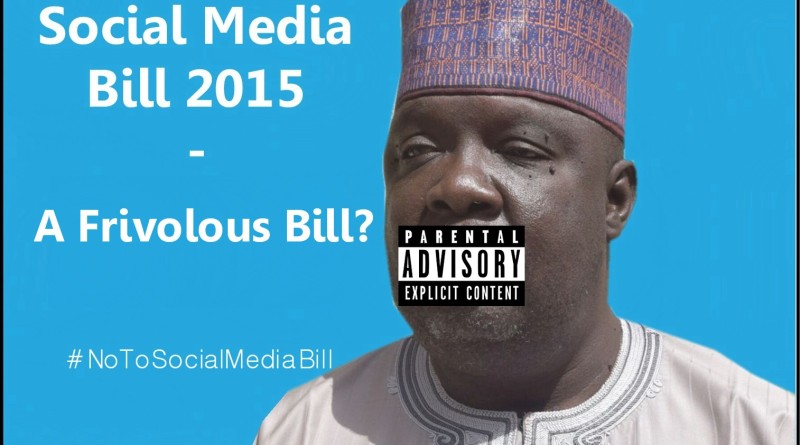 The Social Media Bill currently being debated by the Senate must be stopped.  On ground, in front of Nigeria’s National Assembly and on all the various social media platforms, protests abound against the Social Media Bill proposed by Senator Bala Na’allah and currently being debated on the floor of the Senate. Many have explored the issue from a wide variety of angles, but two things strike me as odd in this matter.  One is that I have tried to find the sponsor, Senator Na’allah on Social media but to no avail.  Secondly, the alarming concern as to why Senator Na’allah should bring such a bill forward at all, when there are clearly very significant concerns which the Senate needs to be engaged on.  This is all the more concerning as Senator Na’allah is the deputy Senate Leader. 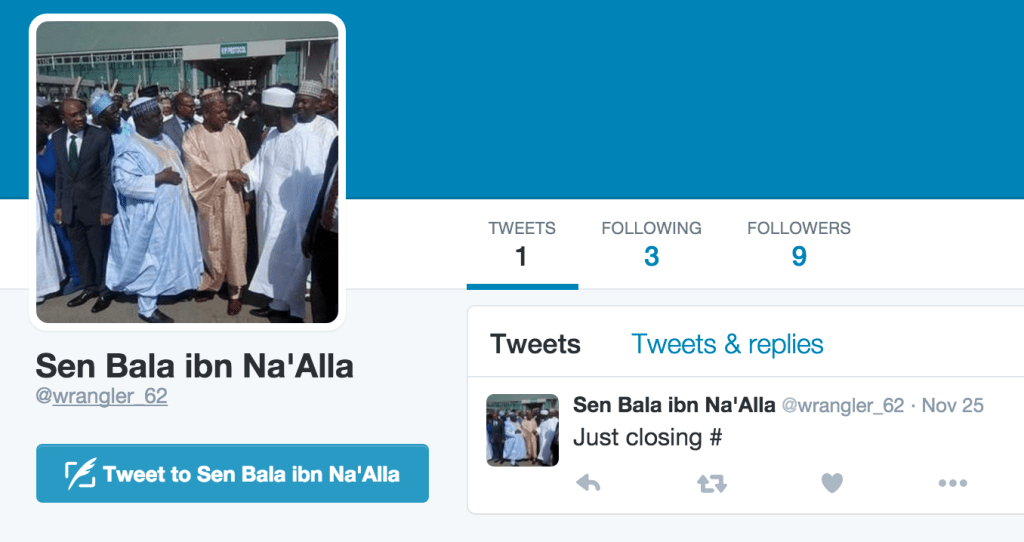 I have tried to investigate this issue, initially I just wanted to see the sorts of antagonisation Bala and been subjected to that prompted him to sponsor this bill, oddly titled“Act to Prohibit Frivolous Petitions and Other Related Matters”.  On investigation I could not find Senator Na’allah on any social media.  There is a presence on twitter but its hard to tell if it is genuine as the profile has only 9 followers.  He is no where to be found on facebook unless he is there by a pseudonym, and certainly not on Instagram, snapchat, pinterest, tumblr or others.  I also came across his website, http://senbalanaallah.com/ which is in a shocking state.  None of the links work and when you click on the headers you simply get an error message.  Even more shocking, when you click on the social media links at the bottom of the page, absolutely none of them work – all producing an error page. 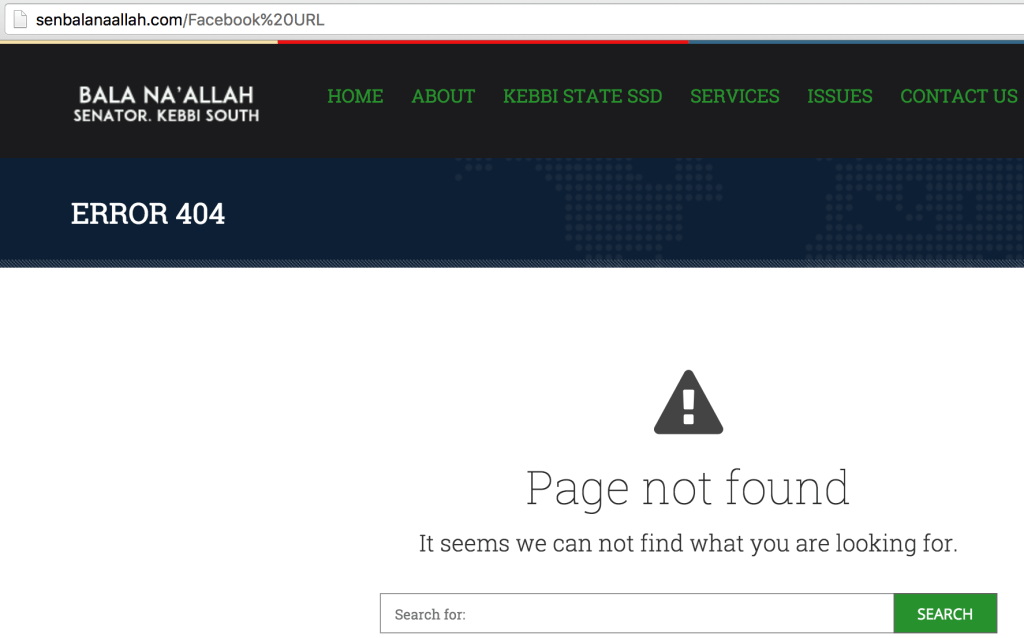 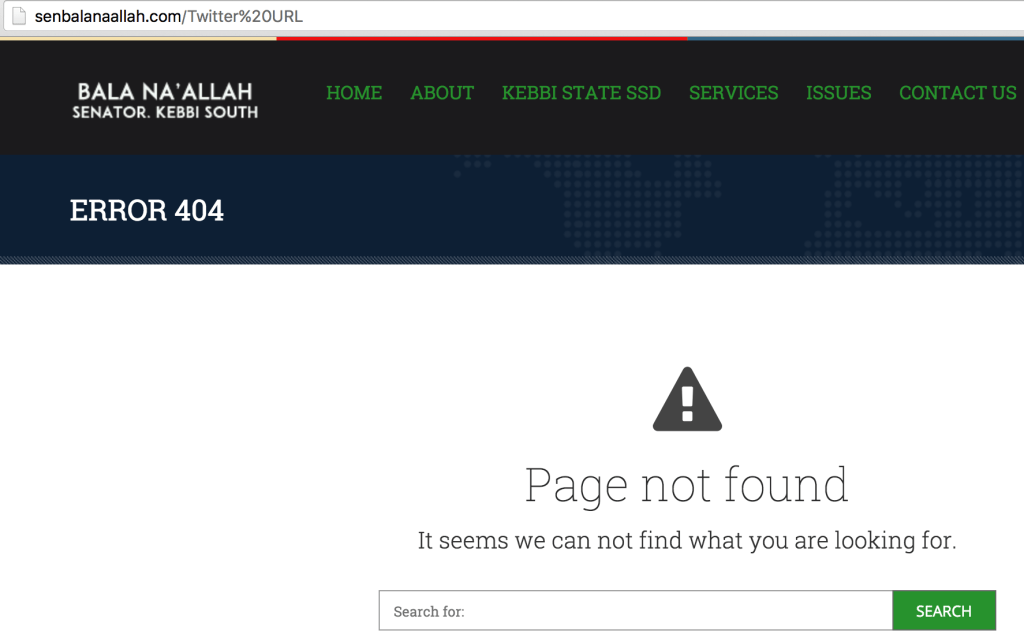 This left me wondering, what is Senator Na’allah doing with such his Social Media Bill.  Who is actually the author of this bill and could Senator Na’allah’s presumed lack of awareness of social media be the cause of the presentation of this rather frivolous bill?  In the media, the Senator and his supporters have said he is misunderstood, that his Bill is intended to protect everyone on social media; it is now being pointed out to him, and I agree, that the Bill is extremely poorly worded, seems to lack clarity or focus, does not define key notions and the prescribed punishments are utterly punitive and out of kilter with the Constitution of Nigeria.  The net effect will be to stifle free speech and fundamentally damage the innovation that comes from social media through the free flow of ideas.  It would seem therefore, that the Senator has malicious intent; perhaps to curb the voluminous attacks on politicians.  I believe citizens also want to stop attacks on politicians, that will however happen not by the passing of this Bill but by politicians ending in the culture of impunity, greed and ever increasing and pernicious  corruption.

Where is Senator Na’allahs priorities

The Social Media Bill is an insult to Nigeria and to the people of Senator Na’allah’s constituency.  I challenge the senator to produce a single petition from a constituent requesting his attention to the issue of frivolous petitions or the social media activities of Nigerians.  I am certain that such request do not exist.  And what of the the real issues facing our Nation? That a sitting Senator, the deputy Senate Leader should bring such a bill when there are major issues such as security, accountability and social welfare; it is the height of frivolousness.  This bill has taken sufficient time of the Senate and has been a major distraction in the country;  it is time for Senator Na’allah to see sense and end this charade, particularly as there are no aspects of the Bill that are not already covered by existing law.

The bill is simply an exercise in frivolity and an end to the monumental waste of time is all the more pertinent as the President of the Federation has already said that he would not assent to this legislations as it is deemed to be contrary to the constitution of Nigeria.  The people rightly expect their leaders to give their time to considering and acting on matters that are of priority rather than pet projects.  The voice of the people on this matter has be aired loud and clear #NoToSocialMedaiBill.