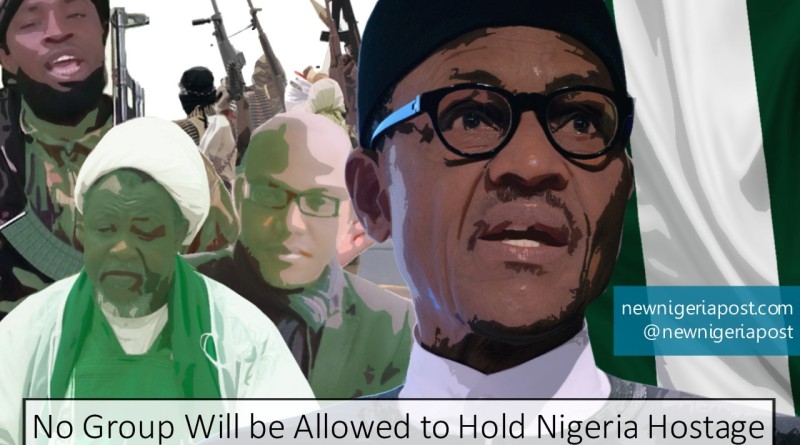 Over the Christmas Season President Muhammadu Buhari said “We must never again allow any group to hold the nation to ransom under whatever guise”.

I believe that this is a very necessary, strong and important statement which the government must follow through.  Nigeria has been plagued by armed groups creating havoc across the country, from the Niger Delta militants in the South, to Boko Haram in the North.  The net effect of this has been that Nigerian’s across the board are living under a state of perceptual insecurity and very serious socio-economic challenges.

No democracy should tolerate armed insurrection.  The Niger Delta crisis which began with largely unarmed inter-community conflicts in the 1990s was allowed to continue for many years, with both state and Federal governments playing politics with the crisis by supporting different sides on different occasions and colluding with some to help win elections.

By 2003, this crisis had become a more serious problem, with the emergence of armed groups coupled with the influx of small arms and other weapons, leading to increasing militarisation of the Niger Delta.  There is a large body of evidence that both finance and weapons flowed from politicians in their own quest to control the community dynamics and hold on to power at all cost.  The situation led to all sorts of criminality, from armed robbery, kidnapping, piracy and oil bunkering. It wasn’t until 2008 that the Federal government began to take the situation more seriously and launched large-scale military operation in the area.  By this time, the situation was much deeper and more complex.  President Umaru Musa Yar’Adua announced an Amnesty programme on June 26, 2009; a 60 day window for Militants to surrender their weapons and be granted unconditional pardon and engage in government training and rehabilitation programmes. All the evidence is that Amnesty has had little effect, the programme has been plagued with allegations of corruption; it’s also becoming very clear that the Niger Delta is still heavily militarised  and armed groups are threatening to re-surface again. The broader lesson from the Amnesty programme seems to be that militancy pays.

Boko Haram and the thirst for blood The Boko Haram crisis has been defined by the worst kind of government collusion – inaction.  Worst still, the group was widely suspected to be financed and supported by politicians including individuals in the cabinet of President Goodluck Jonathan as he confirmed himself in a speech in 2014.

2009 saw the emergence of the current and very violent Boko Haram insurgency when tensions within itself resulted in split of the group into two factions, the Salafist conservative faction led by Abu Usmatul al-Ansari, and the more dominant, violent faction led by Abubakar Shekau, with the later ISIL’s West African branch.

Our government failed to act, almost treating the threat as insignificant. Boko Haram grew from strength to strength, mounting strong campaign against the ill-equipped Nigerian Army and suicide bombing campaigns.  Boko Haram has overtaken Isis as the world’s most deadly terrorist organisation, according to the Global Terrorism Index, was responsible for 6,644 deaths in 2014; rising by 300 per cent to 7,512 by 2015. This is the largest increase in terrorist-caused deaths ever recorded by any country.  The failure of the previous government to tackle this issue with the seriousness it deserved was further exemplified by the Dasuki/arms deal scandal currently playing out, where billions of dollars earmarked for purchasing arms to fight Boko Haram, were diverted and shared to individuals and companies in pursuit of election victory.  Boko Haram has been significantly diminished since President Buhari took office. 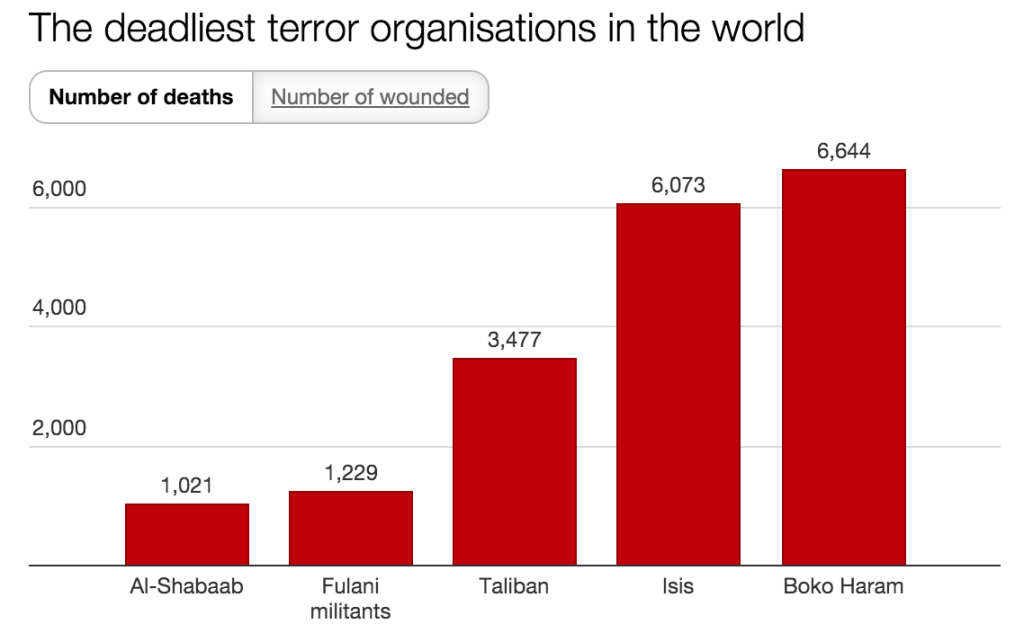 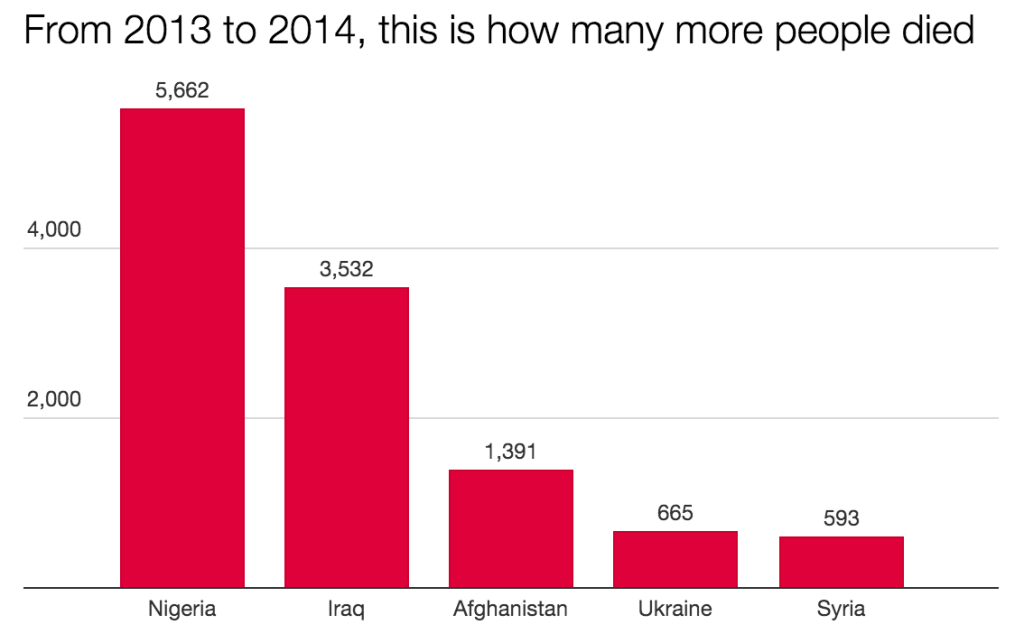 2016 and new threats on the horizon

The first duty of the President of Nigeria and Comander-in-chief of the Armed Forces is the protection of life and property of all the citizens of Nigeria.  A government that can not guarantee the security of its citizens does not deserve to be in office.  Insecurity was almost becoming the norm in our country and people seem to have gotten used to the worst kind of violence on a regular basis.  Looking ahead from the vantage point of 2015, many more threats lie ahead, from the recent Military engagement with another group, Islamic Movement of Nigeria, led by a prominent Shiite cleric Sheikh Ibrahim Zakzaky; the Biafra agitation, with the incarceration of Nnamdi Kanu and the threats of violence re-surfacing from the Niger Delta, Nigeria is set to face further armed challenges.  This is why Buhari’s statement is so important.  The government needs to send a clear message to those who take up arms to address their grievances, that no democratic nation can tolerate armed insurgency in its territory; and must swiftly tackle all such attempts.

“We must never again allow any group to hold the nation to ransom under whatever guise,” he said, called on Nigerians not “to allow current socio-economic and security challenges to dampen our expectations for a better Nigeria”.

I support this statement, all grievances must be addressed through the democratic process rather than taking up arms.  It is clear for all to see that those who take up arms pretending to be pursuing legitimate cause are often just seeking to enrich themselves.  The problems that this create for our nation is also awe-apparent and the nation needs the breathing space to focus on more progressive preoccupations.