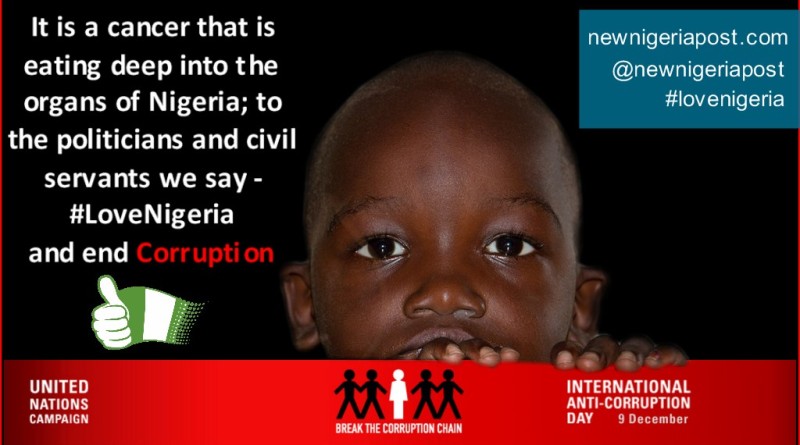 The new 2030 Agenda for Sustainable Development, our plan to end poverty and ensure lives of dignity for all, recognises the need to fight corruption in all its aspects and calls for significant reductions in illicit financial flows as well as for the recovery of stolen assets.  — Secretary-General Ban Ki-moon, Message for the 2015 International Anti-Corruption Day 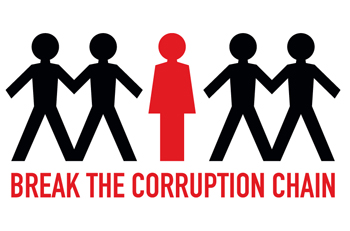 The 2015 Theme is ‘Break the corruption chain’ and we at New Nigeria Post are delighted to join citizens of Nigeria in calling on
our politicians and civil servants to #lovenigeria and end CORRUPTION, it is a cancer that is eating deep into the organs of our nation.  Progress is Possible, but corrupt is a major barrier that needs to be defeated.

On 31 October 2003, the General Assembly adopted the United Nations Convention against Corruption (resolution 58/4). The Assembly also designated 9 December as International Anti-Corruption Day, to raise awareness of corruption and of the role of the Convention in combating and preventing it.

Corruption is a complex social, political and economic phenomenon that affects all countries. Corruption undermines democratic institutions, slows economic development and contributes to governmental instability. We have seen the full impact of corruption in Nigeria; where millions continue to live below the poverty line despite vast profits from Oil wealth of the nation.

Corruption attacks the foundation of democratic institutions by distorting electoral processes, perverting the rule of law and creating bureaucratic quagmires whose only reason for existing is the soliciting of bribes. Economic development is stunted because foreign direct investment is discouraged and small businesses within the country often find it impossible to overcome the “start-up costs” required because of corruption.

We have also seen the impact of corruption in undermining our democracy and the rule of law, leading to human rights violations, distorted markets, and serious insecurity including kidnapping and the threat of terrorism.  If we are to make considerable progress, to walk towards achieving the full potential of Nigeria, corruption must be defeated.