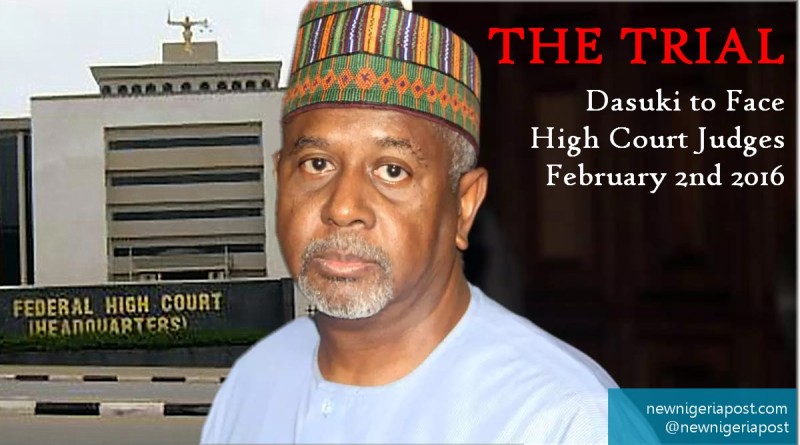 The trial of former National Security Adviser, Sambo Dasuki, over a 3.3 Billion Naira arms scam, will begin on February 2nd 2016.

The High Court at Abuja sat today, Monday 21st December 2016 to hear bail arguments on the  armsgate scandal involving Dasuki and other accused persons.  Justice Peter Afem of the FCT High Court, granted Dasuki and the former Minister of State for Finance, Bashir Yuguda; and four others bail in the sum of N250m each.

Dasuki, alongside Yuguda; Shuaibu Salisu, a former Director of Finance and Administration, Office of the National Security Adviser; Attahiru Dalhatu Bafawara, a former governor of Sokoto State; Sagir Attahiru, Bafarawa’s son and Dalhatu Investment Limited are being prosecuted by the Economic and Financial Crimes Commission, EFCC, on a 22-count charge  bordering on conspiracy, bribery, abuse of office and criminal breach of trust to the tune of N28, 315, 000,000.00

A statement by EFCC said that:

Count one of the charge reads: “That you, Col. Muhammed Sambo Dasuki( rtd.), whilst being the National Security Adviser and Shuaibu Salisu,  whilst being the Director of Finance and Administration in the office of the National Security Adviser,  between  14th April, 2014 and 7th  May, 2015 in Abuja, within the jurisdiction of the Honourable Court, entrusted with dominion over certain properties to wit: an aggregate sum of N3, 350, 000,000 (Three Billion, Three Hundred and Fifty Million Naira) being part of the funds in the account of the Office of the National Security Adviser with the Central Bank of Nigeria (CBN), committed criminal breach of trust in respect of the said properties when you transferred same to the account of Dalhatu Investment Limited with United Bank for Africa Plc, purporting same to be payment for the supply of security equipment and thereby committed an offence punishable under Section 315 of the Penal Code Act, Cap 532, Vol.4, LFN 2004.”

At a previous sitting on Wednesday, December 16, 2015, Justice Afem fixed ruling on the bail application for today, after listening to the motion for bail moved by counsel to the defence as well as the prosecution’s counter affidavit.

Ruling today, Justice Afem granted the defendants bail in the sum of N250m each with two sureties in like sum.

The sureties must be serving or retired civil or public servant of the rank of director, with proof that they have the wherewithal to provide the said sum in the event of the defendants jumping bail.

Each of the sureties must be resident within the jurisdiction of court and their counsel must recommend in writing that the sureties are of good standing.

The defendants must also submit their international passports to the court.

Justice Afem ordered the defendants to be remanded in Kuje Prison pending the fulfillment of their bail conditions.

This is set to be the trial of 2016 with implications of many high-profile politicians and companies and media houses who have already been named as part of the scandal.  It is expected that others will be named in the build up to the trial or during the trial itself.