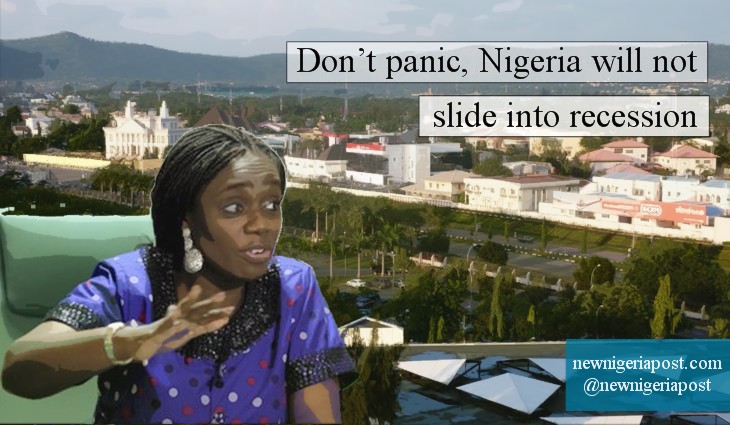 Nigeria will face only a short recession if its economy shrinks again in the second quarter, because removing fuel subsidies and implementing policies to reduce dependency on oil will pay off, Finance Minister Kemi Adeosun said.

On Tuesday, the International Monetary Fund said Nigeria’s economy is likely to contract by 1.8 percent this year because of a slump in oil prices and a shortage of hard currency.

Gross domestic product contracted by 0.36 percent in the first quarter of the year and the central bank’s governor has said a recession appears to be imminent. Data for second-quarter GDP is expected in August.

“I think if we are in recession, what I will like to say is that we are going to come out of it and it is going to be a short one,” Adeosun told reporters after briefing the Senate on the economy. “I don’t think we should panic.”

Her comments were the first government reaction to the IMF forecast.

Adeosun said government measures such as the lifting of fuel subsidies and boosting of non-oil production would give the economy a fillip. “Agriculture output seems to be up,” she said.

“We were subsidising around 45 million litres of fuel per day,” she said. “These are real savings to the economy which we are now redirecting into the essential infrastructure that will keep the economy going.”

In June, the central bank removed the naira’s peg to the dollar to ease dollar shortages, but liquidity remains thin and the currency dropped to a new low on Thursday.

Hours after Adeosun’s briefing, Budget Minister Udoma Udo Udoma told reporters the economy “will be in positive territory” by the end of 2016.

“We will be at about 3.3 to 3.5 percent economic growth by the end of this year,” he said after a meeting of the National Economic Council, which advises the government. He said non-oil revenues, particularly from taxes, looked set to rise.

“We are expecting the economy to begin to grow again from the third quarter on to the fourth quarter,” he said.

Last week, Udoma told lawmakers the government’s first-quarter revenues reached only 55 percent of their target, largely due to militant attacks on oil and gas facilities in the southern Niger Delta energy hub.

The attacks have cut oil production, pushing what was Africa’s largest oil producer behind Angola and threatening the country’s main revenue source.