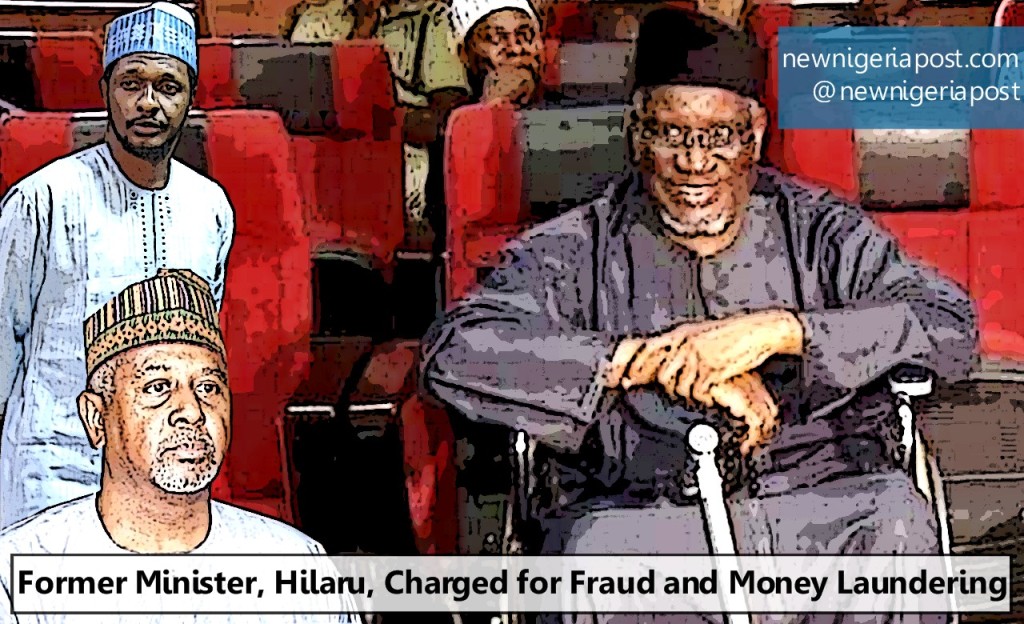 Former defence minister and Chairman of the Peoples Democratic Party, Bello Haliru Mohammed has been charged with fraud and money laundering.

The case is part of the on-going Arms Deal scandal (also widely referred to as ‘dasukigte’.  He is accused along with his son, Bello Abba Mohammed, of diverting $1.5m (£1m) that was meant to buy arms for soldiers fighting Islamist Boko Haram militants.

The two were arraigned by the Economic and Financial Crimes Commission, (EFCC), on Tuesday, January 5, 2016 before Justice A.R Mohammed of the Federal High Court, Abuja on a 4-count charge of criminal breach of trust and money laundering.

Mohammed, and his son, Abba, are being prosecuted by the anti graft agency for their alleged role in the diversion of funds meant for the procurement of arms through the office of the National Security Adviser, Sambo Dasuki.

One of the charges reads:

“That you Bello Abba Mohammed, Bam Projects and Properties Limited and Dr. Bello H. Mohammed on or about the 17th of March 2015 at Abuja, within the jurisdiction of this Honourable Court took possession of the sum of N300,000,000 (Three Hundred Million Naira) paid into the account of Bam Projects and Properties Limited with Sterling Bank Plc from the account of the office of the National Security Adviser with the Central Bank of Nigeria when you reasonably ought to have known that the said fund formed part of the proceed of an unlawful activity of Col. Mohammed Sambo Dasuki (rtd); the then National Security Adviser (to wit: Criminal Breach of Trust and Corruption) and you thereby committed an offence contrary to section 15(2) (d) of the Money Laundering (Prohibition) Act 2011 as amended in 2012 and punishable under section 15(3) of the same Act”.

Following a plea of ‘not guilty’ by both defendants, prosecuting counsel, Aliyu F. Yusuf, urged the court to remand the accused persons in prison custody and fix a date for the commencement of trial.

Justice A.R Mohammed ordered the 1st defendant to be remanded in Kuje Prison and the 3rd defendant to be under the supervision of the Inspector General of Police, who must be notified immediately since the accused is still receiving treatment in the hospital.

The case was adjourned to January 7, 2016 for ruling on the bail application.

President Muhammadu Buhari, who took office in May, set up an investigation into the procurement of weapons for the military, which found that phantom contracts worth $2bn had been awarded.

Last month, former national security adviser Sambo Dasuki was arrested and charged with 19 counts of fraud, money laundering and criminal breach of trust in connection to the case; his trial begins 2nd February.