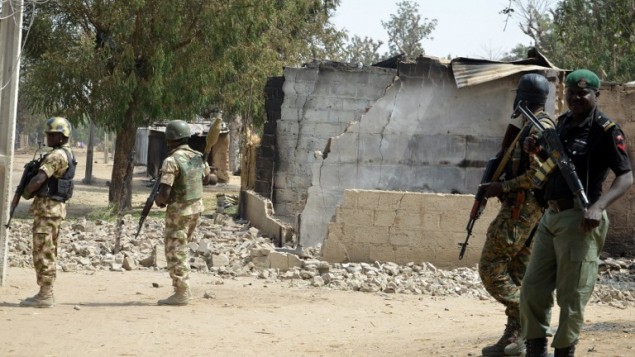 ABUJA, Nigeria — Nigeria’s intelligence agency on Tuesday said it has arrested a recruiter for the Islamic State group, as well as seven alleged members of the Boko Haram offshoot Ansaru.

The announcement comes nearly a year after the leader of Boko Haram in northeast Nigeria, Abubakar Shekau, pledged allegiance to IS leader in Syria and Iraq, Abu Bakr Al-Baghdadi.

Speculation has been rife since then on whether closer links would be forged between the two groups, with lawless Libya and the remote Sahel region pinpointed as a possible source of contact.

The Department of State Services (DSS) said in an emailed statement that Abdussalam Enesi Yunusa was detained in the northern city of Kano on January 17.

His arrest came after intelligence unveiled “his terrorist antecedents and covert drive to indoctrinate and recruit susceptible youths in the country,” the statement read.

The DSS described Yunusa as a “recruiter for the Islamic State of Iraq and Syria (ISIS)” and said he was preparing to go to Libya to join an “ISIS terrorist training camp” with at least three others.

The secret police said he told them two other Nigerians were already undergoing training in the north African country, which has slid into bloodshed since the fall of Muammar Gaddafi in 2011.

At least two others, including one from Niger, were “ISIS agents operating in Nigeria and the West African sub-region,” funded by an IS “media expert” using international money transfers.

Four others were arrested in Kano on January 22 “while migrating to Libya, with their immediate families, including infants, in a bid to join ISIS,” the DSS said.

Two students were arrested a week later, also in Kano, on suspicion of plotting “coordinated lone wolf attacks” on crowded civilian targets in Nigeria, it added.

Fears have been expressed about a link-up between IS fighters in Libya and Boko Haram as well as al-Qaeda affiliated jihadist groups in places such as Mali and elsewhere in North Africa.

But there has been little evidence of the use of foreign fighters in Boko Haram’s insurgency, which has left at least 17,000 dead and displaced more than 2.6 million people since 2009.

Nigeria’s President Muhammadu Buhari told Britain’s Daily Telegraph in an interview published Thursday he was aware of reports of Nigerians in the Libyan town of Sirte and Syria itself.

“I don’t know which side but they may be fighting for ISIL. How many, I have no idea,” he was quoted as saying.

On February 3, Buhari said in a speech to the European Parliament that Libya was a “strategic time bomb” because of the proliferation of weapons, many of which reach Boko Haram.

On Ansaru, a Boko Haram splinter group more ideologically aligned to al-Qaeda, the DSS said it arrested seven alleged members in the northern state of Katsina on January 17.

“This group was discovered in an active stage, as its members were already co-ordinating themselves for attacks in Katsina and Kano states, it added.

Little has been heard of Ansaru, which formed in 2012 on the back of ideological differences and a leadership struggle between Shekau and a high-ranking commander known as Khalid al-Barnawi.

It claimed a string of kidnappings of foreigners in Nigeria and northern Cameroon.

Source: The Times of Israel