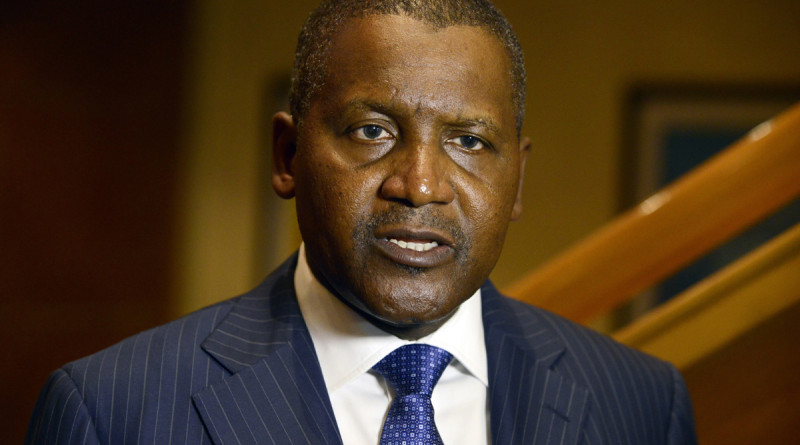 I track the world’s wealthiest people and their philanthropy.  Aliko Dangote of Nigeria, Africa’s richest man, is worth nearly $5 billion less than a year ago following a drop in the stock price of Dangote Cement.

After several years of steady growth in Africa, some sectors of the economy hit a wall. Lower prices for oil and other commodities led to a smaller number of African billionaires than a year ago on Forbes new list of Africa’s 50 Richest – 23 billionaires this year, down from 28.As a group, the continent’s wealthiest 50 are worth $95.6 billion, a decline of $15 billion from a year ago.  Aliko Dangote of Nigeria retains his spot as number one richest African for the fifth year in a row, but his $16.7 billion net worth is nearly $5 billion lower than a year ago, a result of a drop in the stock price at his Dangote Cement and a weaker Nigerian currency.For full list of Africa’s 50 Richest, see here.Number two on the list is Nicky Oppenheimer, whose estimated $6.6 billion fortune stems from the stake he inherited in diamond miner and marketer DeBeers. In 2012, Oppenheimer sold the DeBeers stake to mining giant Anglo American for $5.1 billion in cash. He moves up the ranks from the number three spot in 2014.South Africans made the best showing on the Africa’s richest list this year, occupying 16 spots, up from 11 last year. Nigerians had a smaller representation, with 10 members of the list, down from 13. Eight members hail from Morocco, 7 from Egypt, 3 from Tanzania and 3 from Kenya. There was one each from Algeria, Angola and Uganda.

The one newcomer on the list this year is Kenya’s Narendra Raval, with a net worth estimated at $400 million. A former assistant priest at a Swaminarayan temple – a Hindu sect –Raval was expelled from the sect when he married a Kenyan. He then got a job in the steelmaking business and later started Devki Group, which makes cement, reinforcement bars, and barbed wire.There are once again two women list members: Isabel dos Santos of Angola and Folorunsho Alakija of Nigeria. Dos Santos, the eldest daughter of Angolan President Jose Eduardo dos Santos, sparked four members of the European Parliament to request an investigation in October into her investments in Portugal following a purchase in Dos Santos made in May 2015 of a roughly $200 million stake in Portuguese equipment supplier Efacec Power Solutions. The members of Parliament point to what appears to be the use of Angolan government funds for the purchase. A spokesperson for Dos Santos did not reply to a request for comment.The oldest African tycoon on the list is Miloud Chaabi of Morocco, age 86. His Ynna Holding develops real estate, operates hotels and supermarkets, and is the majority owner of SNEP, a chemical manufacturer in Morocco. The youngest is Mohammed Dewji of Tanzania, age 40. Dewji is CEO of METL, a Tanzanian conglomerate his father founded in the 1970s. It is active in textile manufacturing, flour milling, beverages and edible oils.Seven members of the 2014 list dropped off, including mining mogul Desmond Sacco of South Africa and telecom tycoon Strive Masiyiwa of Zimbabwe (read more about the dropoffs here). Six previous list members returned to the list after dropping off, including South Africans Michiel Le Roux, CEO of Capitec Bank, and Raymond Ackerman, founder of retailer Pick N Pay Holdings (read more about the returnees here).  The minimum net worth required to make the list this year was $330 million, down from $510 million a year ago.

METHODOLOGYOur list tracks the wealth of African citizens who reside on the continent, thus excluding Sudanese-born billionaire Mo Ibrahim, who is a U.K. citizen, and billionaire London resident Mohamed Al-Fayed, an Egyptian citizen. We calculated net worths using stock prices and currency exchange rates from the close of business on Friday, November 13. To value privately-held businesses, we couple estimates of revenues or profits with prevailing price-to-sales or price-to-earnings ratios for similar public companies.We have purposely excluded dispersed family fortunes such as the Chandaria family of Kenya and the Madhvanis of Uganda, because the wealth is believed to be held by dozens of family members. We do include wealth belonging to a member’s immediate relatives if the wealth can be traced to one living individual; in that case, you’ll see “& family” on our list as an indication.