Early this year Médecins Sans Frontières (MSF), with the Ministry of Health, opened the first comprehensive programme dedicated to survivors of sexual violence in Port Harcourt, Nigeria. The programme aims to provide comprehensive medical and psychological treatment, delivered in conjunction with awareness campaigns, to help fight against the stigma attached to sexual violence, and encourage people to seek health care earlier. Educational institutions have been an important focus of the campaign, particularly at the commencement of the university year. 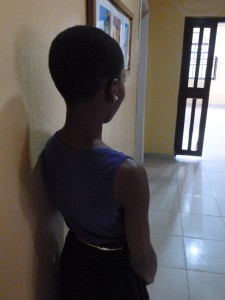 the past four months. Here they describe the project’s first major awareness campaign and their involvement in it.

Can you describe the awareness campaign?

Each week MSF teams visit different facilities – such as universities, schools, health clinics and local media outlets. At the universities we give presentations to different faculties and distribute posters and flyers, as well as meeting with the people working in the health clinics on campus. Our nurses visit schools, both primary and secondary, on a regular basis, adapting their presentations to suit the age and the nature of the context. We have some books that we are using in some of the schools, including one in particular called ‘No! Don’t Touch Me There’.  It is written by a Nigerian and explains how children should be protective of their private parts and to disclose if someone touches them.

With the media we are doing radio interviews on a weekly basis with three different radio stations. The interviews are provided free of charge to MSF and we have developed 13 different topics to be discussed on air at each station. These topics cover a variety of relevant information including misconceptions, what happens when you arrive at the clinic, psychosocial issues and male sexual abuse.

We are also very active in community awareness and attending community meetings within Port Harcourt, other villages and local government areas. The police are one of the main referrers for survivors. We spend time each week going to different police stations distributing flyers and posters and giving talks to the officers to improve their knowledge of sexual violence.

How important is it to raise awareness of sexual violence with students?

Because female students are particularly vulnerable and are often the targets of sexual violence, they are a key focus of the campaign and why sensitisation is so vital for our project to continue. It is not only about acceptance of MSF, but also improving awareness of sexual violence in the population and reducing the stigma associated with sexual violence. It is also important to inform people that treatment is available, and that it is free and confidential.

We specifically focus on students, as education is considered to be very important with high numbers of students attending tertiary institutions here in Port Harcourt. Our team has been proactive in identifying the various student bodies and then making the contact and relationships to disseminate the information.

The key focus of the campaign has been to reach students at the commencement of the university year, as well as to reach the health clinics on campus. The police stations close to the universities have also been contacted, with posters and pamphlets distributed at these facilities. The nursing team has done presentations at different faculties including the schools of nursing and midwifery, and at the University of Science and Technology. Consequently we have received survivors from the various institutions and police stations.

What about the broader community?

Sensitisation in the community is also important and the assistant project coordinator, in collaboration with the clinic team, has attended several community meetings in different local government areas. These communities are hugely vulnerable due to poverty and a lack of healthcare services. Our relationship with these communities is essential to ensuring our sensitisation activities are able to be carried out.

The intricate nature of the context here in Port Harcourt makes it difficult for us to reach some areas of Rivers State and without the approval and acceptance of the different groups within Rivers State we would not be able to access these populations.Since opening the new sexual violence clinic, MSF has seen on average 35 cases per month. However, with the awareness-raising campaign in September, there was a doubling in the number of survivors coming into the clinic. Survivors range from infants to mature adults – both female and male, however the majority are female and children.