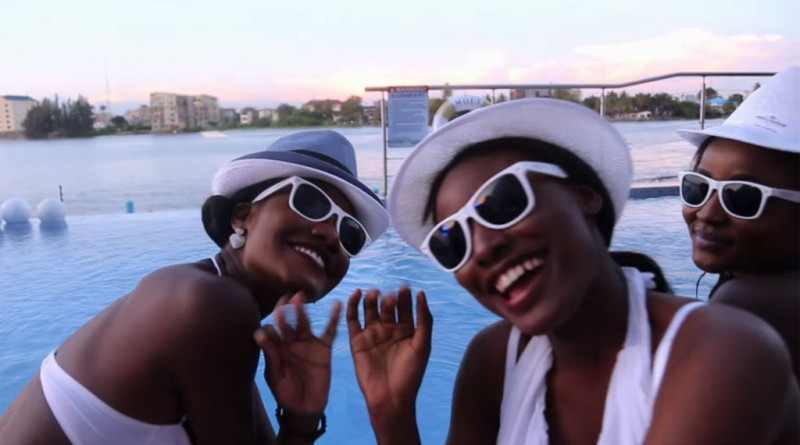 The children of Nigerian migrants who came west are returning to the land of their parents – and finding the jobs and opportunities that Britain has failed to deliver.

The champagne is flowing at the bustling Fahrenheit rooftop bar with its sweeping views of Victoria Island’s skyline. With glasses clinking young Nigerians returnees from the diaspora jostle to tell of their tales of the opportunities they’ve unearthed since coming home. They call them the repatriates – or more simply the “repats”.

Among the guests at Fahrenheit, a hub for diaspora returnees started by a London-trained Nigerian lawyer and designer, was Kemdy McEarnest who had only moved to Lagos just seven months earlier. He talked exuberantly about how Nigeria was on the up and the range of opportunities he had developed for his own PR business since coming to the country. He said if Nigerians can return in large numbers then the country could really “grow”.

Sitting alongside him was Aisha Shaba. I had earlier met Aisha when I had visited the set of “On the Couch”, a talk show on the Nigerian Spice TV fashion channel. Aisha grew up in Hammersmith in west London and told me it had been a steep learning curve in the hustle and bustle of Nigeria since coming back four years ago after graduating from university.

She landed a part in the country’s biggest soap opera, “Tinsel”, and has now moved on to other acting parts in film and TV as well as working as a presenter. “A lot of people are coming back now. And I think that’s an amazing thing,” she said.

Where young educated Nigerians in the diaspora might previously have looked to build their futures in cities like London, Paris or New York, growing numbers are now looking to return home even though the country still faces huge problems with a dilapidated infrastructure, poverty and widespread corruption.

They’ve also been encouraged by the recent election of President Buhari who has pledged to stamp out corruption and build a new Nigeria. Africa’s most populous country – with over 170 million inhabitants – has huge natural resources and vast potential.

Some might say these “repats” are among the lucky few – and there is certainly a whiff of resentment, even some hostility towards some of them. But those I met were keen to argue that they had taken some big risks in returning home, giving up careers and opportunities elsewhere.

They also argue that it is skilled, educated Nigerians with vision, like themselves, who could be best placed to contribute towards changing the country – and in turn persuade others with skills and resources to come back. They believe they can blaze a trail for others.

Many of these repats also resent and fiercely reject the stereotypes of Nigeria which they say are routinely trotted out in the international media, of an impoverished country with little hope, ravaged by Islamist insurgency. They want to challenge such perceptions by starting up new businesses and industries, improve the country’s infrastructure and grow the economy.

One of those who has come back and is now at the forefront of trying to change perceptions is Baba Jallah Epega who runs a major communications and events company. He left at the age of 6 and grew up in the UK, but returned to Nigeria two years ago. He moved to Lagos with his wife Helen Isibor-Epega, a highly accomplished composer and musician who performs under the name The Venus Bushfires.

Baba Epega’s EMC3 communications company has many high-profile clients in Nigeria and beyond, including those looking to now invest in the country. He is regularly approached in Nigeria and the UK by young people who are looking to come back, or by their families.

“As you can see there has been a big boom for the arts, for fashion, music and film. And then there are others who are setting up agri-businesses, engineering, mining companies, you name it. You can feel there’s a big rush.”

His wife Helen is enthused by this development. She said: “I would definitely encourage people to come back, especially those who are well-trained, highly-educated, forward-thinking and progressive. I think during the last 25 years a lot of people who could leave, left. And it was brain drain and now we’re seeing more of a brain gain.”

The “repats” are keen to promote another image of Lagos – an upwardly mobile population who see massive opportunities. During my visit many repats were among the guests at a huge party to mark the launch of the American beer Miller Genuine Draft, which was held in a park. International and Nigerian DJs, including local big names DJ Caise and DJ Xclusive, were playing from behind decks on top of a giant illuminated stage designed like a huge boom box, with the party goers thronging below. The scene could have been Miami, New York or London.

With music thumping out behind us and swirling strobe lights flashing across a mass of guests busting their moves, I came across a TV presenter who had just come back from living in New York and other Nigerians returning from across Europe. Near the red carpet, where TV hosts jostled to interview the celebrity guests including musicians, artists and fashion designers, I met Michael Ugwu, the General Manager of Sony Music West Africa.

Michael graduated with an MSc in Economics from University College London and back in his motherland he has emerged as a leading music and entertainment entrepreneur.

He said: “I was born in the UK. I was living in there my whole life and then I came back to Nigeria. And it’s been like a roller coaster.

“But it’s been fun. Lagos is home now. Africa is where it’s at. So if you are not in Africa, come back.”