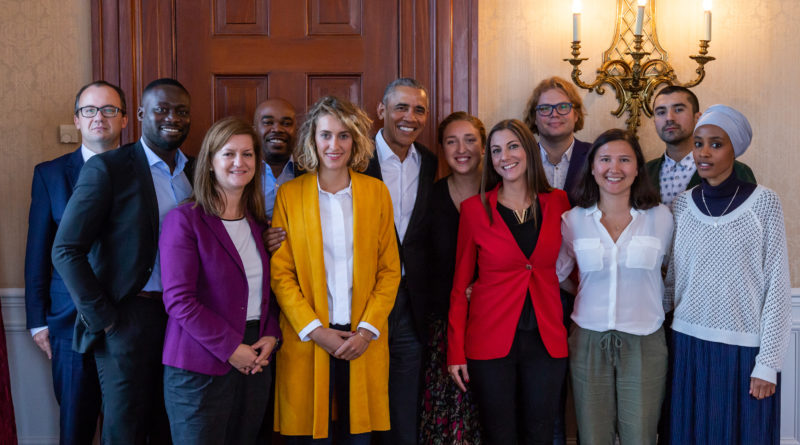 Former US President Barack Obama met with 11 young leaders from around the world – He had a roundtable with them to learn about their work and how the Obama Foundation can impact the lives of young people in their communities – A Nigerian, Nero Ughwujabo, who is a special adviser to UK’s Prime Minister Theresa May, was part of the people the ex-president met. Nero Ughwujabo, a resident in the United Kingdom but hails from the Urhobo community of Delta state, Nigeria.

The roundtable is part of a series of sessions the foundation has conducted over the past year and a half to understand what tools rising leaders need in order to advance and scale their work. Participants 11 countries around the continent, including Estonia, Finland, France, Germany, Greece, Italy, Lithuania, the Netherlands, Poland, Switzerland, and the UK.

Obama Foundation said: “As we look to expand Foundation programming around the world, it’s important to us — and to President Obama — that we take time to sit down with emerging leaders to better understand their needs as they carry forward the hard work of change in their respective fields. We’re also excited to explore the ways we can equip them with the tools and resources they need to ramp up their efforts.” “The Obama Foundation’s goal is to inspire, empower, and connect people to change their world,” said Bernadette Meehan, the Foundation’s Chief International Officer.

In his own remark, Nero said: “I’m really focused on leading our government’s response to the Race Disparity Audit right now, and I serve as a special adviser to the UK Prime Minister on Social Justice, Young People and Opportunities. I’m always surprised by the enthusiasm of young people for civic engagement and their willingness to contribute in meaningful ways. I believe deeply in the possibility of change and that community action can make a real difference in people’s lives to make the world a better place.” As a result of roundtables and town halls Obama and the Foundation conducted in Brazil, Germany, India, Indonesia, New Zealand, and Singapore, the Foundation this year launched several civic engagement programs that support young leaders globally.

The Obama Foundation Scholars is a one year residential program that gives rising young leaders around the world who are already making a difference in their communities the opportunity to take their work to the next level through a newly designed curriculum at the University of Chicago and Columbia University that brings together academic, skills-based, and hands-on learning. The inaugural group of 37 Scholars began their studies this month. The Obama Foundation Fellows program supports and elevates outstanding civic innovators from around the world with the goals of strengthening the impact of their life-changing work and inspiring a new wave of civic action. The two-year fellowship offers hands-on training, resources, and leadership development, and Fellows participate in four multi-day gatherings where they collaborate with each other, connect with potential partners and resources, and collectively push their work forward.